The Benefits of Green Tea to Health

It cannot be understated how beneficial not only to your health but also to your weight loss efforts that drinking green tea daily can be for you.

The Chinese have known this for millennia and now we in the west are waking up to its incredible health properties.

After all, one of the major aspects of losing weight naturally is maintaining the best physical heath that you can I order to maximize the benefits you can get from your efforts to lose that weight. 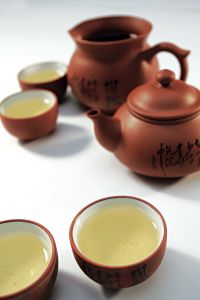 So let's look at how green tea can boost your attempts to lose weight while improving your health as well.

The Health Benefits of Green Tea

The most important health factor of the constituents of green tea is its antioxidant properties.

In fact, green tea contains substances known as catechin polyphenols, of which epigallocatechin gallate is a powerful antioxidant and is found in high levels in this tea.

Antioxidants are important in helping the body to rid itself of harmful free radicals which are known to cause cell damage, which may then lead to certain cancers and also aging.

There are also compounds in green tea that have been found to combat cancer cells themselves, inhibiting their growth and preventing their spread throughout the body. In fact scientists have discovered that in Chinese men and women who regularly drink this beverage, instances of oesophageal cancer has been found to be reduced by about 60%.

Research has found that it also helps reduce levels of bad (LDL) cholesterol while boosting levels of good (HDL) cholesterol. This is good news for those worried about the negative effects of cholesterol on the body, especially the heart.

Additionally, heart disease is known to be much lower in populations where there is a high consumption of products containing resveratrol, for instance the French who drink a lot of red wine. Green tea has been shown to contain a substance called EGCG which has the same properties as those of resveratrol but is about twice as powerful.

So for most people reading this article, their main interest must be in the properties of this incredible beverage that make it a powerful addition to their weight management strategy.

In fact there is overwhelming proof that drinking green tea to lose weight can be a viable part of that strategy, even if you are already on a commercial diet like Nutrisystem, Jenny Craig or any one of the popular home delivered diets for example.

So as well as being extremely good for health, drinking green tea has been shown in studies to help with weight loss. A combination of the caffeine present in the tea along with its other health properties was seen by researchers at the University of Geneva in Switzerland to cause a control group to burn significantly more calories than those who took a placebo.

Green tea has also been shown to have the ability to inhibit the insulin response to eating foods that contain high levels of sugars or high GI carbohydrates. This reduces the body's tendency to convert the excess sugars to fat which is then stored in the body.

That is extremely good news for dieters who want to improve the effectiveness of their diets by drinking green tea shortly after eating.

Aside from anything else, drinking green tea has been shown to boost a feeling of calmness and reduced stress because it boosts the production of feel good hormones in the body.

Stress reduction is also a major part of losing weight as stress interferes with the digestive process causing more foods to be stored as fat and less efficient digestion and incorporation of nutrients from food.

As a relaxant, green tea makes an excellent beverage to drink any time of the day. However, it should not be taken right before going to sleep at night as it does contain low levels of caffeine, much lower than both black tea and coffee.

To get the most from the relaxing properties of this beverage, drink it an hour or more before bedtime to minimize the effects of the caffeine while maximizing the effects of its serotonin producing properties, which make you feel good and help you relax and sleep more soundly.

So as you can see, drinking this wonderful drink can really help with boosting your health while providing weight loss aid especially when taken in conjunction with a good, healthy diet to those that need it and want to use every available tool to make their own strategy as effective as possible.

After all, if there is something that is readily available as relatively inexpensive, then it would be foolish not to take advantage of it.